Rasmus Lindh (Gothenburg, Sweden) made his first appearance with Juncos Racing this past fall at the Chris Griffis Memorial test at the Indianapolis Motor Speedway.

“I’m very happy to have the opportunity to go to the next step in the Road to Indy program with a championship winning team,” said Lindh. “I really enjoyed working with Juncos Racing this past fall, so I am happy that we are back together for the 2019 season.”

Lindh joins Juncos Racing after an impressive rookie season in the Cooper Tires USF2000 Championship where he earned five podiums and three poles. The young Swedish native would go on to claim second in the championship.

Team Owner Ricardo Juncos said, “We are very happy to announce our first Indy Pro 2000 driver for the 2019 season. Rasmus (Lindh) has a lot of talent which he showed us this past fall during the Chris Griffis test. We are very excited to begin our work with him and are looking forward to another successful season. I would like to thank Rasmus, his family, and sponsors for the opportunity to have him a part of our Indy Pro 2000 program.” 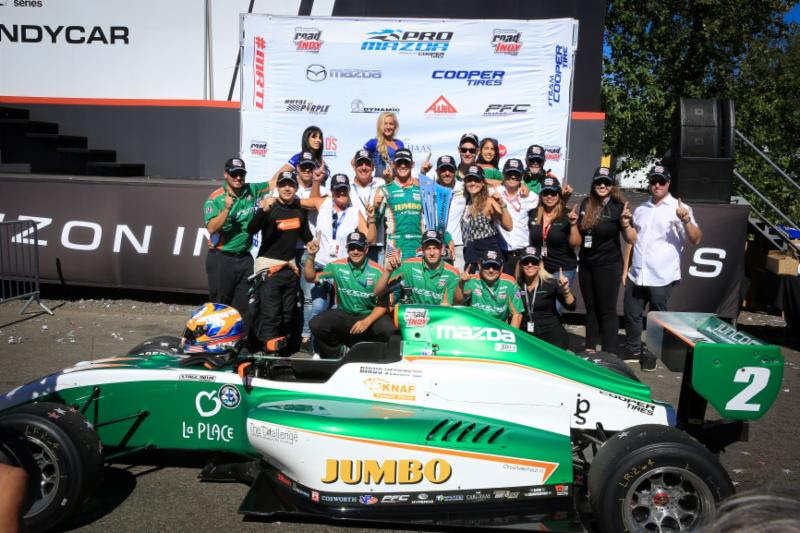 In the fall of 2018 Juncos Racing announced their expansion to the IMSA WeatherTech SportsCar Championship and will field one Cadillac DPi-V.R entry in the 2019 season.

Ricardo Juncos established Juncos Racing in 1997 as a small formula car race program based in Buenos Aires, Argentina. After times became financially tough, Juncos relocated to the United States in 2002 where he worked as a mechanic for a small karting team based in Florida. Juncos was then able to open the doors to his own shop and run in karting series throughout the United States.

In 2017, Juncos Racing announced they would enter the Verizon IndyCar Series and compete in the 101st Running of the Indianapolis 500. The rookie team would go on to finish a respected 15th with Sebastian Saavedra and 18th with Spencer Pigot. Juncos Racing also captured the Pro Mazda Championship and Indy Lights Championship, as the only team to win both series in the same year in the Mazda Road to Indy history.

Most recently the team finished off the 2018 season winning the Indy Pro 2000 (former Pro Mazda” Driver and Team Championship with rookie driver Rinus VeeKay. The team also competed in 12 of the 19 Verizon IndyCar Series events with three drivers sharing the No. 32 entry including the 2017 Indy Lights Champion Kyle Kaiser, Rene Binder, and Alfonso Celis Jr.

The mission of Juncos Racing is to develop young drivers from around the world into the next level of their racing careers through the Juncos Racing Driver Development Program. Through this program, the team not only works with drivers on track to improve their skills behind the wheel, but also gives them the tools needed to understand the engineering and mechanics of the race car. Drivers who have participated in the program and have gone on to compete in the next level include Connor de Phillippi, Nicolas Dapero, Tatiana Calderon, Peter Dempsey, Conor Daly, Spencer Pigot, Will Owen, Victor Franzoni, Kyle Kaiser and Rinus VeeKay.